There was a time, not that long ago, that I wouldn’t have considered inviting people over to my home for a meal. Correction …. for years I didn’t.

What a terrible waste. I cheated myself out of so much pleasure. Missed out on opportunities to connect with others, to build relationships. I’ll never know just how much good I missed.

Entertaining felt intimidating. All my excuses were firmly rooted in fear and comparison. I wasn’t a good enough cook. My house wasn’t comfortable for guests. My stuff was old. They might find fault with me. It would make me vulnerable. And so it went for many, many years.

There’s a Christian song out now titled “Fear Is A Liar”, and it’s true. Simply put, I was suffering from an identity crisis. Comparing my skills, my stuff, my personality to someone else held me hostage. When I came to realize that my identity was not … IS NOT … founded on those things, my thinking slowly began to change. 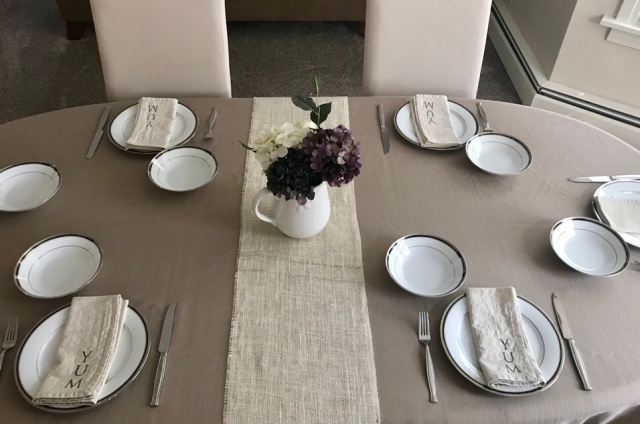 If all I could make was grilled cheese sandwiches and soup, then that’s what I served. If all I had were old dishes, that’s what we used. If I only had room for 4, that’s how many we invited.

Fear of failure, of being exposed, of being found “less than” is a real thing. It can trap you into loneliness, isolation and more. It can keep you from trying new things. Yes, fear is a liar.

I read somewhere that the words “fear not” appears in scripture 365 times. That’s a solid DO NOT FEAR for every day of the year. Coincidence? I think not. I think God knew I’d need daily reminders.

It only took 49 years to get there, but I eventually did. I finally started believing what God says.

Here’s the deal. If I can, you can. So go ahead and make the baked spaghetti, pull out the china that has never been used, clean up your home and make that phone call. And go check out all the “fear nots” for yourself.